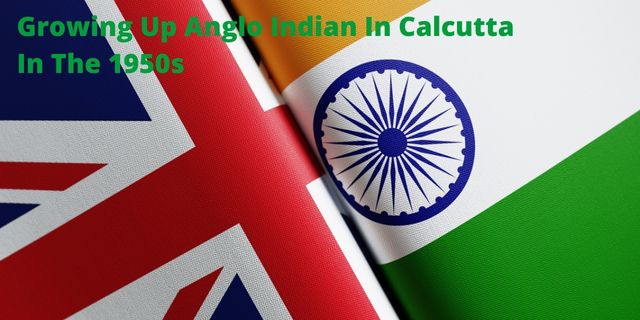 Some may wonder what being an Anglo-Indian means. Thankfully Wikipedia provides the answer. I highly recommend reading it. I’d like to share my view when I was a child.

This is a continuation of my earlier post, Childhood Memories Of Calcutta In The 1950s.

We spoke only English at home. Our parents and we wore western clothes. Our meals alternated between Indian spicy food and English dishes. Anglo-Indians had western-sounding names.

The schools we attended taught us in English. Our Hindi and Bengali classes seemed like we were learning a foreign language. Fancy that. We considered the local languages foreign.

England was our North Star. We yearned to go and live in England. How did this all come about?

When the European traders from Portugal, Holland, and Britain first arrived in India, their main purpose was trade. Little by little, through occupation and wars, the British annexed India as part of the British Empire. Britain ruled India from 1858 till India and Pakistan won Independence in 1947.

British men were encouraged to marry Indian women. The offspring were educated using the English education system through English Speaking and Religious Schools. The English-speaking kids when grown-up, were employed as Civil Servants by Companies run by the British such as the Railways and Telegraph, which they installed across India.

Anglo-Indians fell into a hierarchical class between the local Indians and the British.

Christmas in Calcutta was like no other. As Christians, we celebrated Christmas in a big way. Being a kid during the Christmas season was the most wonderful thing in the world.

Virtually every family baked Christmas fruit cakes using their secret recipes. When we visited friends, everyone shared slices of their Christmas cakes with pride.

My most enjoyable times were attending so many Christmas parties, especially for kids. Santa always gave us presents. I never figured out that these were supplied by our parents until a teenager.

Putting up the Christmas tree was always fun. Going to church for Midnight Mass was always exciting because we could stay up late for a change. As soon as we returned home we had to go to bed. Santa was going to visit us. Our Mum told us if we stayed awake, Santa would pass us by.

Christmas day always began looking to see what Santa had brought us. So much happened at Christmastime that you will find a post dedicated to this season following this post.

Anglo’s loved to party. Indian food, party games, and dancing were the mainstay of any party. I can remember our home being transformed for parties so many times. Being a child I remember looking up at the adults when they were dancing.

Since we were short on space, the bed had to be dismantled and stored in Nana’s room. Chairs were arranged around the walls. The electric gramophone became the center of attraction as song after song was played from bakelite 78 rpm records that were all singles.

One of my cousins usually took charge of keeping the gramophone well-fed with the popular songs of the day. Well featured were artists like Nat King Cole, Frank Sinatra, and Elvis Presley.

Being a little kid I got a lot of attention from the adults which I lapped up!

When we had a party to celebrate my First Communion at age 7, the invitees were the same adults. My friends also made their First Communion and were having their own parties. The only difference was being dressed up in my white suit and tie.

My piano was in the room. You can guess what I was asked to do. Even though my repertoire was extremely limited having recently started piano lessons I had one hit to share. Chop Sticks.

My teacher was able to teach me that since it was so easy. When I started to play this two-figured ditty, one or two of the adults had to join in to show they also knew chopsticks ha!

A wedding was a party on steroids! Instead of using one’s home, a hall was rented. Much like it is done today.

I can remember two locations very clearly. The Grail Club. And Clem Brown. Amazingly, they are both still in use today as social gathering watering holes and places for having big parties.

One of my biggest disappointments occurred at a wedding held at the Clem Brown. I was 9 at the time. My Mum, cousins and I were among the guests.

Typical of Anglo events, all the tables and chairs were arranged along the four walls, leaving a lot of space in the middle for couples to dance. A band played at one corner of the room where a stage was set up. Our table was at the opposite end of the hall from where the band was located.

A girl started walking in our direction from the other end of the hall. I gave this no attention. Heavens, she was getting closer to our table. This girl stood out from the crowd because she had a white complexion. I noticed she was Sheila Thompson from the convent I used to attend.

Within seconds she was at our table and looking at me. She smiled and asked me to dance. My goodness, what should I do? I was so shy and worried I would mess things up. I was not a good dancer, and that has not changed. Just ask my wife!

I balked and said no. My folks did their best to encourage me to go and dance with Sheila. I stood my ground and froze. Looking back I can kick myself for not accepting Sheila’s offer. She must have recognized me from across the hall and had the courage to walk over and ask me to dance.

What a fool I was for resisting. The tragedy of it all was I really liked her. She was beautiful. Especially to a 9-year-old boy. Although many decades have passed I still think of that moment as one of the biggest missed opportunities of my life.

I went through four grades at the high school located within St. Joseph’s College. We had great teachers. Exams now reared their ugly head. We were shielded from formal tests in Kindergarten. Not any more.

Doing real homework regularly became a reality of life. I found math very tough. My math test grades stunk. When my mother got my report card she wanted to do something about it. She did it in a most unusual manner.

I had a math exam coming up. My Mum happened to discuss my problem with a Homeopathic doctor who conducted her practice in a dedicated room in her apartment below ours.

Dr. Kalayanpur was our GP, and a very nice doctor she was. She lived alone with her mother. Their apartment was clean to the extreme. We had to remove our shoes when we entered and had to walk around barefoot. I thought that was so cool!

The Doctor offered to coach me with my math studies. On the evening before the math test, I spent at least two hours revising the math material in my textbook. She gave me various tests she made up. I kept getting them wrong. Dr. Kalayanpur was so patient and took the time to explain things to me.

Did this help? A little. My math results although not a passing grade were a big improvement from before. That showed how bad I must have been.

My mother decided for me to continue with tuition on a regular basis. Twice a week after returning home from school, off to the doctor I would go with my books. Mainly I did my homework there. Not only math but everything. Dr. Kalayanpur checked my work had helped me figure out the answer when I got things wrong.

We Changed The Doctor’s Profession

News spread about my tutor when my Mum told the mothers of my school friends. It wasn’t long before the doctor’s apartment was filled with other students whom she now coached. I had a feeling that coaching kids with their studies became her main source of income.

Dr. Kalayanpur was very grateful to my mother for helping her start a new profession. She found it very rewarding to help other kids improve their academic results.

Without exception, all our friends were Anglo-Indians. We all had European names. English was the main language we spoke. For many, it was the only language we were fluent in.

Our customs were aligned with the British. Sure, we ate Indian food like curries. But there were variants that emerged as distinctly Anglo-Indian. We were all Christians, the majority being Catholic.

Clubs existed that were all English based. Calcutta had the Racecourse, golf courses, and tennis clubs. Since most of the British had left India after independence, the clientele of these establishments were predominantly Anglo-Indians. There was another legacy from the British.

Before Independence, they entertained wealthy Indians as members of these exclusive clubs. These Indian families went through the British education system established in India, either as parochial schools or English-speaking private schools.

In the schools I attended, there was a small percentage of students from middle-class Indian families where English was also spoken in addition to the local languages, Bengali and Hindi.

The British legacy was lasting in the following areas:

How Do I Feel Being Anglo Indian

I feel grateful for the parents I had and the family I grew up in. Most Anglo-Indians have left India for other English-speaking countries like the UK, Australia, Canada, and of course the US. The traditional Anglo-Indian individual who is a descendant of European men who married Indian women is disappearing.

The children of Anglo-Indian families who have moved to other countries usually have spouses from those countries rather than other Anglo-Indians.

Anglo-Indians who make up a small percentage of the human race have made contributions to entertainment, sports, science, and leadership roles in higher percentages compared to other races. For example, here are some notable Anglo-Indians you may know of.

If you ever come across someone who looks Indian but has an English or European family name, they may well be Anglo-Indian! You read it here first ha!

6 thoughts on “Growing Up Anglo-Indian In Calcutta”