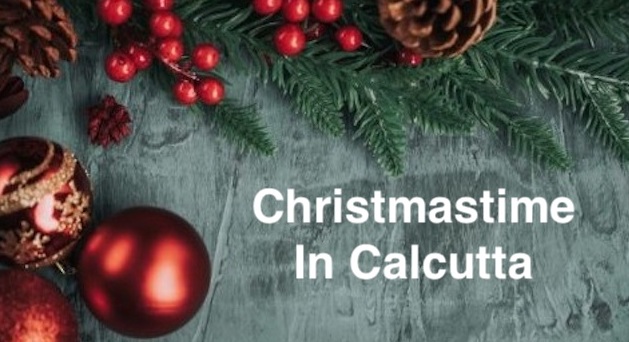 Christmastime in Calcutta in the 1950s was like no other. We celebrated Christmas in a big way. As Anglo-Indians, it took on a whole different dimension!

Preparations began at least 60 days before Christmas. It started with the planning of the Christmas Cake. What kind of decorations we would use in the home? This led to a fun and excited discussion. We also started the process of getting newly tailored clothes.

Everything culminated on Christmas Day. When we were too little to attend Midnight Mass, we slept in the hope that we would see Father Christmas, as Santa was called.

After we made our First Communion, we attended Midnight Mass.

Christmas for kids was packed with anticipation and fun as I will share below.

The tailor brought out samples of material for us to choose from. I got very excited looking at what he showed us.

After talking it out with our Mum, we picked out the material we liked. The tailor took our measurements. I wondered how my suit would turn out.

The usual routine was to return a couple of weeks later for a rough fitting.

At this phase, the suits looked half-finished with the seams not sown. And the lining was not put in. The tailor folded the material at the trouser bottoms and pinned them to create the hem later. The same was done for the sleeves of the jacket.

In a month or so, we would return to try out the finished suits. If alterations were necessary, they were done. However, this was rare.

By now, the New Market was decorated to the hilt with Christmas decorations. Lights, streamers, and artificial Christmas Trees were everywhere. Inside and outside. Since we lived in the tropics, live trees were a rarity. We only saw artificial trees.

Our sisters, Mercy, and Marianne went through a different process. A designer came to the home to show our Mum and them a selection of dress fabrics to choose from. The girls were measured.

Unlike the boys, the completed dresses were brought over for the final trial a month later. Usually, these fit the first time. Maybe it was less complicated to make dresses compared to suits.

I find it strange how the fruitcake in the US is much maligned. In India, the fruitcake is paramount for Christmas as well as the basis for wedding cakes. The Christmas fruit cake is shared with visitors with pride.

We had no ovens at home so how did our family bake Christmas Cakes? Firstly, it was a tradition in Calcutta where most families had their secret Christmas Cake recipes.

The main ingredients were dried fruits and almonds. Maybe other nuts too. Each family baked not just one cake. Perhaps a dozen or more.

Months before Christmas we dried the fruit in the hot sun. After they were dried just right, the dried fruit would be soaked in rum. A couple of weeks before Christmas a representative from the local bakery would visit our home with a large mixing bowl and ingredients other than the dried fruit. As well as a whole bunch of circular cake pans lined with greased paper.

Under the direction of Nana, the baker would mix the dough along with the potent dried fruit and nuts. He would then ladle the rich mixture into the cake pans.

I can see all this in action so clearly. The containers with the ingredients would be laid out on the clean floor. The banner would sit cross-legged in front of the mixing bowl with the cake pans within reach.

I can smell the intoxicating aroma just visualizing this scene! The cake pans would be filled about halfway.

Once the work was done, all the cake pans would be placed on a large flat basket to be taken to the bakery for baking.

There was no car involved. The baker would balance this basket on his head and walk to the bakery!

About a week before Christmas the baker would return with the baked cakes. We could hardly wait to see the end result.

The charred greased paper contained the cakes that had risen to near the top of the pans. This time we got the aroma of freshly baked Christmas Cake that was not intoxicating anymore. The rum had got absorbed in the baked tan-colored cakes.

All the Christmas cakes, with the greased paper intact, were carefully removed from the pans and placed on the dining table. Of course, we all wanted a taste. No such thing was permitted.

However, if we were lucky enough to see bits of cake outside the greased paper, we kids would break off any excess pieces and eat them surreptitiously!

All the cakes would be stored inside a cupboard for retrieving one by one over the Christmas season.

Stringing colorful bunting from the center of the ceiling to the walls was very popular. Of course, we had to put up a Christmas Tree, an artificial one naturally.

The tree decorations consisted of ornaments and shiny tinsel we bought at the New Market.

Some of the main streets had Christmas decorations and lights strung across the road.

Large artificial trees were erected on major street intersections. We enjoyed helping the adults put up the decorations.

When visiting stores and seeing the Christmas decorations displayed everywhere made us feel excited that Christmas was near. What would Santa bring us?

Being the oldest child, I made my First Communion at eight years old before my siblings. I was allowed to attend Midnight Mass.

The Church was decorated to the hilt, with the crib being the main focus. As soon as Mass was over we headed to the front of the Crib for a better view.

We lived about a mile from Church, so we walked there and back. The return walk was even more exciting. I wondered what would be awaiting me under the Christmas tree.

I can remember my very first Christmas present Father Christmas got me. It was a play model of a service station. Yes, I was into stuff like that. I loved cars.

After our Cousin Vivian moved to England, he used to send us Christmas parcels. When the postman delivered these, we all got very excited. I can remember three of these presents that I liked a lot.

The first one was a race car with a curved back. The second was the magic magnetic magician who answered your questions by pointing his staff at the answer when you spun him around.

The best present I received was a Hornby train set. The only problem was the power system was different. Calcutta still had Direct Current (DC). In Europe power was Alternating Current (AC). I had to wait for my Dad to make up an electric inverter for me.

Unlike in the West, once New Year ended, the holiday feeling dissipated rapidly. Not so in India, and especially in Calcutta. Guests conducting Christmas visits extended well into January. The Christmas spirit lingered on until the visits stopped. It was only then that the decorations were removed and stored for next Christmas.

As children, we enjoyed the extended Christmas season. Entertaining visitors, as well as visiting friends, was a long Anglo-Indian tradition. Unlike in the West, no appointment was necessary. People just showed up. When we visited people, we just showed up too.

Inevitably a lot of Christmas cake, nuts, chocolates, pastries, and other delights would be laid out on the coffee table for the guests. These were served with a fresh pot of tea. The adults were offered port wine and sherry too. Sometimes harder drinks like brandy and whiskey were served.

Visiting With No Cars

When I was a child in Calcutta, very few people had cars. The chances that someone would not be at home when visiting, especially in the afternoon, was slim. And if they were not, it was off to the next set of friends.

Normal means of transportation would be by rickshaw for short distance visits and trams or taxis for longer ones. Or by foot if close enough.

There was an exception to unannounced visits. When guests were invited to a meal, this was usually preplanned. However, if guests turned up during meal times, they were always invited to join the family.

Anglo Indians have the reputation of cooking way more food than was necessary. This tradition was to err on the side of having more rather than falling short.

About two weeks into January the Christmas feeling had long since passed and Christmas finally ended. We kids had a lot of things to occupy us that the faded Christmas memory didn’t worry us.

Next occasion for presents? Birthdays.

I couldn’t let this opportunity go by without sharing what I found out about how Christmas is celebrated today in Calcutta.

Over the past twenty years, Calcutta has got a jolt into the 21st Century. Although the Anglo-Indian population has dwindled. the local Indian Christians and even non-Christians celebrate the season in a big way just like the West. In some cases, even more so.

Here is a recent YouTube video that shows what I am referring to. It begins with the ending of Midnight Mass at St. Paul’s Cathedral in Central Kolkata and continues to Park Street which is festooned with Christmas lights and decorations. So different to when I lived there.

7 thoughts on “Christmastime In Calcutta In The 1950s”