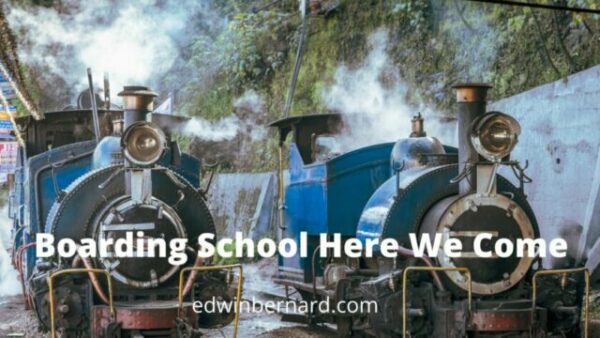 Our parents made the decision to send my brother Colin and me to boarding school while we were preteens. We had just moved to a new neighborhood in Calcutta, and a change of schools was necessary. Our Mum and Dad both worked, with my Dad being stationed on site for months on end. At that time he was supervising the erection of the electric grid system in different locations in India

At that stage of our young lives, there were three of us kids our grandmother who we called Nana, would have to take care of. I was 11, Colin 9, and our sister Mercy, 5. It made sense for the two boys to be shipped off to boarding school.

Why? There were several expedient reasons.

Although the apartment was very comfortable, the landlord had not repaired the water system for years and had no intention of doing that for us. We had water delivered every day by the “Bisti wallah”. These were men who collected water in large leather water bags with straps and manually carried them to homes that didn’t have running water.

This situation would place undue burdens on the single bathroom we had. When we had baths, water was heated up and placed in a bucket for us to use.

Our parents wanted to limit the stress on our Nana. Mercy would not be a problem as the ayah (housemaid), would take her to Kindergarten school each day which was close by.

Instead of selecting a boarding school nearby, our parents chose Goethals Memorial School in Kurseong. About 400 miles away. It was an all-boys school run by the Irish Christian Brothers. Classes ranged from Kindergarten to High School level. It was founded in 1907 in memory of Paul Goethals, a Jesuit Archbishop of Calcutta.

We had an unusual school year. School started in early March and ended at the end of November. Just like our school year was long, we had an extended holiday for three months when the weather got really cold up the mountain.

I will be sharing stories about how this all worked out in the next blog post.

Sadly I wasn’t able to take pictures of the journey. In order to avoid breaking copyright laws, I shall be using links to sources with pictures to illustrate what I will be discussing. When I can find pictures online free of copyright I will use them.

One of these sources will be Wikipedia. The other will be Google. I highly recommend checking these out to get the full picture.

Our journey spanned two days. It involved three trains and one ferry crossing across the Ganges river. Looking back after seeing the Harry Potter movies, I can see several similarities in the two journeys from the railway station from home to school.

Consider one fact. We made this journey several decades before the first Harry Potter book was published.

The railway station we departed from was called Howrah Station. It is in service today serving 3 million passengers daily. It was built in the mid-1800s by the British when India was part of the British Empire. The picture below shows the station close to the banks of the Hoogly river.

The construction style was similar to railway stations in London from the 19th Century using red brick. Howrah Station has evolved through several expansions and more are planned for the future. They just opened up a luxury Executive Lounge for passengers who have extended waiting times to board their train. The current fee is about 65 cents per hour.

This railway junction was located across the Hoogly River, a tributary of the Ganges. We had to go over the iconic Howrah Bridge shown below, to get to the station.

Our school chartered several compartments for the students. Hence, when our mother brought my brother and me to board the train, the hustle and bustle of students and parents were reminiscent of Harry Potter boarding his train. Minus the owl in a cage of course!

Ah ha, there were birds around. Other passengers brought birds in cages, but not owls.

Fortunately, we had friends who were also going to Goethals with us. When our mother gave the news to their parents that they were sending Colin and me to Goethals, guess what happened? They also thought it was a good idea to send their kids too.

Errol and his brother Ernie lived in an apartment across ours on Khetra Das Lane. This was where we lived before moving to our new apartment on Sandal Street. Louie came from the Barracks. And Jeff lived a little further.

By the time the train was on its journey, all the boys in the compartment became best friends. Some of these were returning students and were eager to share their experiences at Goethals.

All of these boys had sisters. And they also were shipped to a boarding school close to Goethals called St. Helens. Since that was an all-girls school, their departure was on a different date.

Our luggage was loaded into the compartments with us. From that point forward, we students were responsible to carry our luggage in transit.

I thought this was handled brilliantly. When the train stopped at a station at lunchtime, caterers would deliver meals to us in metal containers called tiffin carriers. Containers were stacked vertically with a clever mechanism for securing them together. A typical three-container tiffin carrier is shown below. You can buy these today on Amazon and Etsy among other places.

A typical arrangement is as follows. One container would contain boiled rice. Another chicken curry. And the third, some vegetable combination. In addition to this meal. we would also be given a bottle of Coke.

At the next stop about a couple of hours later, food staff would board our compartments and haul the empty tiffin carriers away.

There is one memory that is stuck in my mind forever. On one occasion, I saw plates of leftover chicken bones kept temporarily on the platform floor next to the train.

A young boy, probably about 11, sat next to the plate and started to devour whatever meat was left on these bones. Clearly, he must have been starving. I felt so sad seeing this happen. Eating the leftover food must have been a welcome meal indeed.

Three Trains And A Ferry

The journey to Goethals required three trains and a ferry. Harry Potter took one train and a boat ride across Black Lake to get to Hogwarts. We had a much longer journey of almost 400 miles.

I shall use Google Maps to discuss our journey from Howrah Station to Goethals Memorial School. We lived in Kolkata. Since this city was known as Calcutta, I shall be using this name for historical reasons. The railway station where we boarded our train was in the twin city of Howrah located across the Hoogly river. The iconic Howrah Bridge connected these two major cities.

The blue line represents the journey we took to Goethals Memorial School. The first train we boarded at Howrah Station was the Indian Broad Guage standard. These trains were and are the widest trains in the world. Each compartment was stand-alone. Meaning they didn’t have any walk-throughs to the other compartments. Hence they had their own toilets too.

Howrah To The Ferry Crossing

We departed at 11 am about the same time as Harry Potter’s train. Uncanny right? By late afternoon, we arrived at the Ganges River shown on the map. It was a struggle carrying our luggage from the train station to the ferry. After all, my brother and I were preteens.

On the other side of the ferry crossing, we hurried to get the best compartments on the meter gauge train. This journey would take us through the night, so we all wanted to bag one of the sleeper compartments. This would enable us to lay flat for the night instead of sitting in a chair.

A train bridge has since been built over the River Ganges at this location. Travelers today would not have to take a ferry. I enjoyed that ferry ride and would miss it today if I was a student traveling to Goethals.

My brother and I on our first and subsequent trips, found an upper pull-down bunk to fit in. There was a small ceiling fan nearby that helped keep us cool.

I loved the rackety rack sound of the train as it glided along the train tracks. These were steam trains, so the whistle sound was an added excitement.

The journey took about eight hours which was sufficient to have a good night’s rest. Assuming one could get to sleep. I had no problem sleeping on a moving vehicle then and neither do I have today.

The Toy Train Ride To The Himalayas

We were all excited for the next train ride from New Jalpaiguri Junction. It would be on one of the smallest gauge railways in the world, just two feet tracks. The trains were so small they were called Toy Trains. Yes, they were pulled by miniature steam locomotives too! Goethals used to charter the whole train to take the students to school.

This journey up the Himalayas was so exciting as the train zigged zagged and looped its way up the side of the mountain. Our school was at an altitude of about 5.000 ft above sea level. Jalpaiguri was about 100 ft. above sea level. Hence there was a very steep climb up this mountainside. The views were spectacular.

Although the distance was about 60 miles, the journey took approximately 4 hours. The ride involved innumerable curves, zig-zags, and loops that contributed to the slow progress. Who cared, the ride was a whole lot of fun!

This railway is known as the Darjeeling Himalayan Railway (DHR). It is a historic line because the original Toy Trains are still used between Kurseong and Darjeeling. Unlike when we took this trip when the complete journey from Jalpaiguri to Kurseong was made in these Toy Trains. If you look north from Kurseong on the map you can see Darjeeling.

But wait, we had something special in store. Goethals had its own Toy Train Siding at the bottom of the hill where the school was located. This time around, we didn’t have to lug our luggage up this hill. The school’s two vans took care of that task. We did have to take turns loading the vans though.

By the time we arrived at the school, it was tea time. The first day of school was like another Hogwarts experience which I will share in a future blog post.

If you have any comments or questions, please leave them in the discussion area below. I will respond to you promptly.